Gamifying Science and the CREST Award 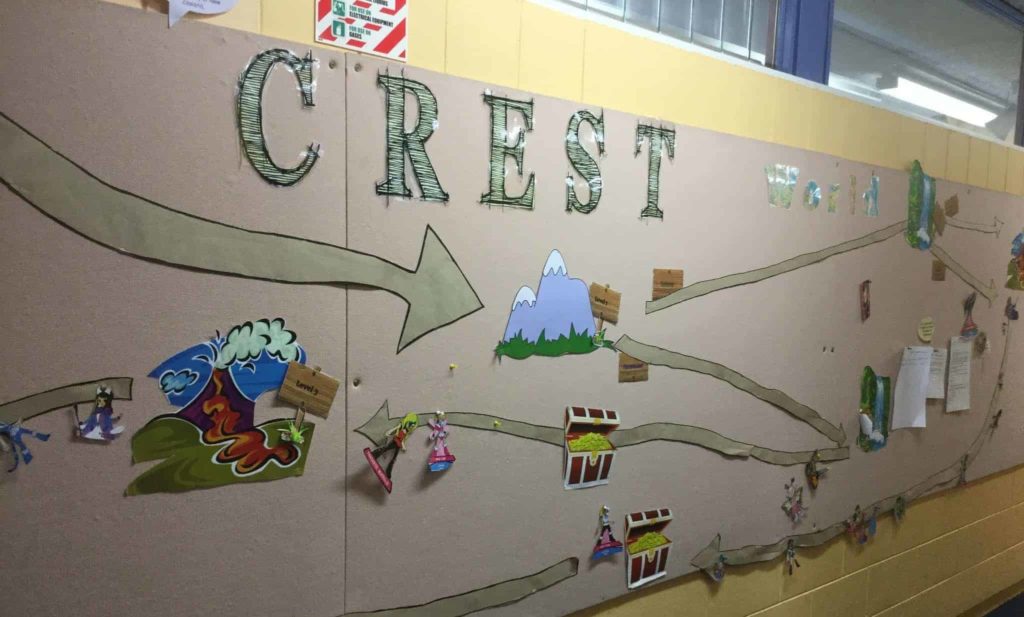 Gamifying Science and the CREST Award

Every year at Selwyn House School, all of our Year 7 students take part in the Royal Society of New Zealand’s First CREST programme.  They devise a question that is of interest to them and conduct an original scientific inquiry around it, or they design and construct a technological product to meet a need that they see. CREST is a robust and interesting learning experience; however, this year we wanted to incorporate gamification strategies to increase engagement and upskill ourselves in a trending teaching philosophy. Gamification had been a professional learning focus for two of the team teachers, and CREST seemed to offer a good opportunity for trying it out.

We told the students they were on a quest. We created a simple website using Google Sites called CREST World, which the students used for instruction, resources and guidance as they moved through their quest. Because they would be gaining so much scientific and technological experience during the term, the students were given eXperience Points (or XP) for all the tasks they undertook. There were six levels of achievement (Choosing a Topic, Proposal, Planning, Experimenting, Presenting, Judging) and each required 100 XP to ‘level up’. Harder tasks within each level were worth more XP; for example, cold calling an expert for help was worth 8 XP, whereas sending them an email was worth a relatively paltry 2 XP. Unique digital badges were emailed to the students to indicate when they had levelled up, and when they got to 600 XP they became eligible to receive their CREST badge. 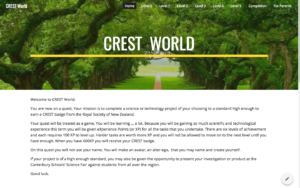 Impressing the Boss
We introduced the idea of a ‘Boss’ character, such as you often get in the final level of a computer game. In this case, the Boss was the external assessor of their projects and the students needed to display enough skill and knowledge to impress (defeat) the Boss. Also, on the quest the students did not use their own name; they made avatars, which they named with superhero names. Finally, a wall outside one of the classrooms had a giant fantasy-themed map with different paths on it, which the students moved their printed Avatar along to indicate XP earned and their progress through the quest. 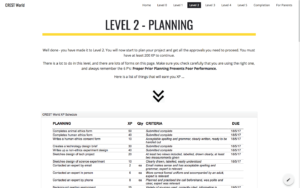 A major challenge when setting up CREST World was the philosophical basis on which we justified having a reward schedule. Because it is a common gamification strategy we knew that we wanted to include one, but as teachers, and as a school, we usually promote that our students take action as a result of their own inward motivation rather than extrinsic inducements, and a great deal of effort goes into creating authentic learning experiences that create personal, emotional connections for the students. We could not see how a reward-based system would dovetail into this paradigm.

Our solution was to design a reward schedule based on how much experience had been gained from a task, rather than how well the student had completed it. A minimum standard was required to earn XP but there was no partial credit, because there is no such thing as partial experience. This meant that all students were able to gain the same XP regardless of ability, which had the added benefit of levelling the playing field for our highest and lowest achievers, who were unlikely to produce the same quality of work for the same amount of effort.

The XP-based reward schedule also allowed us to shape the learning curve and provide a manageable structure for the students to follow when moving through CREST World. We were delighted to hear feedback from one of our parents who noted that the XP schedule had easily stepped her daughter through the CREST process and subsequently provided more motivation to keep going, because nothing was overwhelmingly big. We also noted that students who might normally have difficulty with deadlines started watching the points tally very closely. 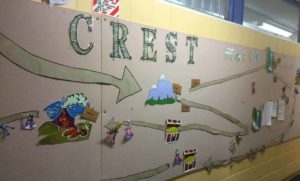 Development still to do
CREST World worked extremely well, but there is development still to do. One of our hopes for this project was to create a dynamic learning experience that the students could independently guide themselves through by taking or leaving whichever XP tasks they needed, much like a pick-a-path novel. We had hoped for something multi-faceted and non-linear, but had difficulty mapping XP to tasks to achieve this. It was obvious to the students which paths they would most benefit from following, so to take the road less traveled by never really appeared to be an option. Next time, we hope to better balance the earning potential of the XP so that students are happy on whichever road they choose.

The XP schedule and CREST World took time to set up, but once it was done the students could self-regulate their learning with ease and Google’s productivity apps (Docs, Sheets, Sites etc.) were the widely available, cheap and simple tools that helped us to achieve this. When ‘The Boss’ finally came, she was thoroughly impressed by every single one of the students’ projects and clear level of engagement with their topics. Incorporating gamification strategies into our teaching has been a thoroughly worthwhile experience and we are already wondering how we can do something similar for our speech writing unit later in the year.